"If you expose digital the way you expose film, you run into the twin dangers of failing to exploit the camera’s dynamic range, and creating exposures whose shadows are noisier than they need to be." - Adobe Whitepaper - Raw Capture, Linear Gamma and Exposure - Bruce Fraser.

Film was engineered to respond pretty much in the same way as we see, which made perfect sense at the time. While twice the light made the image brighter, it did not make the image twice as bright. There is a compression factor in the way human senses respond to input which allows us to react over a wide range of values. This allows us to deal with indoor and outdoor light in a manner which is rather different than the change in values that are actually present. Were this not so, the bright exterior light would be intolerable, or the dull interior light would be too dark to be useful. 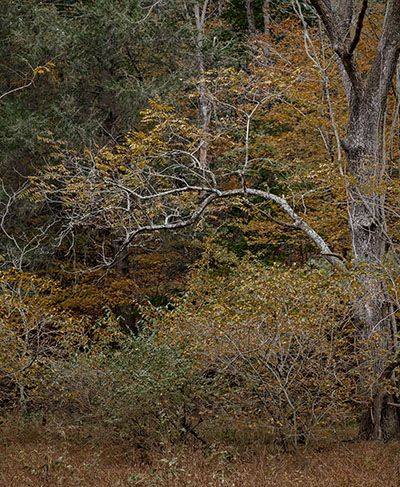 Not so with digital capture. Camera sensors react in a linear fashion, so twice the light means twice the value - literally. This linear distribution of values means that each stop of light captured by your camera is either double or half of the value of the previous. Processed in this manner the image would not look good to us for creating images. So, the distribution of tonal values in a processed file are given a rather strong gamma correction to make the image look like we would expect.

Images with a lot of low end detail need to be exposed carefully. Underexposed images will lose detail in darker areas. Images exposed brighter than the desired result will give you information in the digital file that can easily be darkened to get the look you want without concerns about noise. It is most important to watch the ends of the histogram to be sure clipping of exposure values is avoided.

It is important to understand how the camera exposure relates to the finished image. In raw capture, the first stop at the bright end of the exposure actually contains 50% of the total number of captured photons. Underexposure means throwing away valuable capture information. As each stop darker only contains half the photons, shadow exposure has significantly less information than highlight exposure. Expanding the darker exposure to brighten the image therefore introduces the danger of increased image noise and posterization as breaks may appear in the available data. Compression of information by darkening an image does not have this issue.

We tend to make exposure decisions based on the camera processed jpgs. This is only of real value if you intend to actually use the jpg file. The representation of the raw file by a camera processed jpg file is poor at best. The highlight exposure warning is especially deceiving as clipped jpg highlights may have no bearing on the content of the raw file. See Shooting and Processing Hints and Exposure for more information.

It is typical of camera meters to protect highlight exposure assuming that you are going to use the jpg file. This can mean underexposure of a raw file by a full stop or more depending on your metering method. Losing that valuable highlight information is unfortunate at the very least. This means you need to test your camera and compare the jpg files to the raw files for exposure. If you are truly interested in capturing the best raw file possible, this is very important.